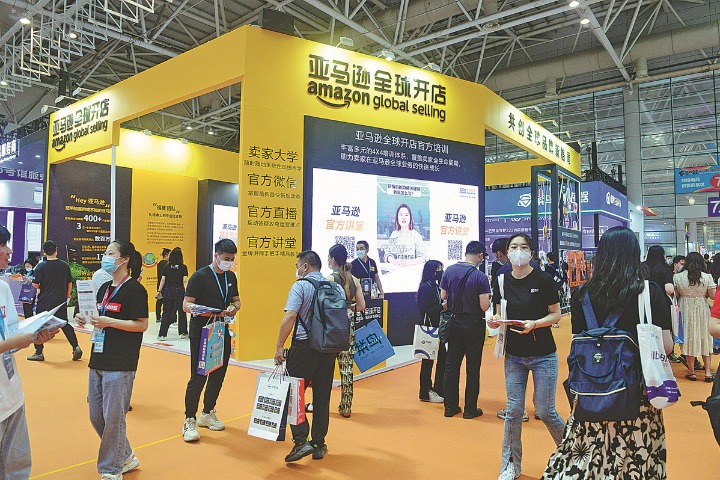 The increase in such transactions also plays a vital role in stabilizing China’s foreign trade and economic growth amid the COVID-19 pandemic and complex external environment, they added.

“Sales of our headphones on Amazon represent approximately 35% of the company’s global sales. In 2020, sales through overseas e-commerce channels grew by 400% annually,” Lin said.

Chinese sellers are paying more attention to building brands and expanding their presence in overseas markets, given the rapid growth of the cross-border e-commerce industry, according to Amazon Global Selling, which helps merchants Chinese to sell their products abroad.

“In the past, many Chinese products only had a price advantage,” said Cindy Tai, vice president of Amazon and head of Global Selling Asia. “However, we are seeing more and more well-designed, high-tech, differentiated products coming from China, such as smart home appliances, office supplies, clothing and home furnishings.”

China has a strong manufacturing base and competitive advantage in supply chains, coupled with favorable political support and the innovative spirit of Chinese entrepreneurs, Tai said. She called cross-border e-commerce an unstoppable trend that contributes to the transformation of “Made in China” into “Brands from China”.

With China’s advantages in these areas, “we have full confidence in the prospects of cross-border e-commerce,” she said.

The number of Chinese brands that have completed their registration on Amazon has increased 40 times in four years, and these sellers are emphasizing global expansion, with 14% of Chinese brands having brands in more than five countries and regions. , the e-commerce giant said.

“As a new form of foreign trade, cross-border e-commerce has grown rapidly during the pandemic and has become an important engine for stabilizing China’s foreign trade,” said Zhang Zhouping, senior analyst of business-to-business trade and international trade. -frontier activities at the Internet Economy Institute, a national consulting firm.

This type of commerce has grown exponentially, especially in the past two years, as the pandemic has hampered business travel and face-to-face meetings.

China’s cross-border e-commerce import and export volume totaled 1.98 trillion yuan ($293.2 billion) in 2021, up 15 percent year on year, according to the General Administration of Customs. E-commerce exports amounted to 1.44 trillion yuan, an annual increase of 24.5%.

The country has stepped up efforts to spur the development of new forms and models of foreign trade as part of a broader effort to promote high-quality development, experts said.

As part of the government’s support measures, the People’s Bank of China said in June that it will improve cross-border renminbi settlement policies in e-commerce and other new modes of foreign trade to better serve the economy. real and to facilitate trade and investment.

The cross-border field of activity of payment institutions will be extended from goods and services to all current account transactions. It details the requirements imposed on banks and payment institutions to make settlements and specifies the provisions relating to the verification of authenticity and the prevention of money laundering.

In February, the State Council, China’s cabinet, approved the establishment of several cross-border e-commerce pilot zones in 27 cities and regions as the government seeks to stabilize foreign trade and investment.

The new pilot areas, including those in Ordos, Inner Mongolia Autonomous Region, and Yangzhou, Jiangsu Province, are intended to replicate and advance the experience of the previous five groups of test areas. according to the State Council.

The move raised the total number of pilot areas to 132, covering almost all provincial-level regions in China, from coastal industrial powerhouses such as Jiangsu, Zhejiang and Guangdong provinces to inland areas.

“Digital tools and digital transformation are key enablers for global micro, small, and medium enterprises, or MSMEs, to survive and thrive in the unpredictable era of COVID-19,” said Diane Wang, Founder, President and CEO. from DHgate, a leading Chinese cross-border B2B e-commerce company.

Building on the resilience of China’s supply chain, DHgate has equipped global MSMEs with capabilities such as increased data flow, deeper understanding of customer demand, and a more tailored product portfolio for consumers. help them succeed in a tough business environment, Wang said.

The company saw a steady increase in sales of products designed for home use last year. Household appliances, consumer electronics, clothes, toys and outdoor sportswear have gained popularity among overseas consumers, he said.

DHgate is also exploring new possibilities in social media-focused industries. He launched Myy-Shop, a social commerce software-as-a-service company that connects Chinese supply chains with people who have significant private domain traffic or influencers on social media platforms around the world.

The number of active users on MyyShop grew 76.3% YoY in the first quarter of this year, while the number of paying users grew 65.6% YoY as gross merchandise value skyrocketed 845.5% in one year. basis, according to DHgate.

The gross value of goods is the total amount of sales made by a company over a given period, calculated before deducting accrued expenses. It is useful for comparing total sales volumes between time periods.

Many foreign trade companies are facing increasing pressure and challenges related to supply chains and rising logistics costs. The pandemic has affected all forms of transportation, causing supply and demand issues and higher freight rates. Experts have called for an accelerated opening of overseas warehouses and improvements to global service networks.

“Cross-border e-commerce platforms have become an efficient and convenient way for traditional manufacturing companies to expand their footprint overseas. They can also help MSMEs to open up new markets,” said Lyu Gang, a researcher at the State Development Research Center. Advice.

There should be more efforts to participate in the formulation of international digital trade rules and to strengthen policy support for MSMEs on taxation, customs clearance, exchange rate fluctuations, digital business transformation and protection. rights in foreign markets, he added.