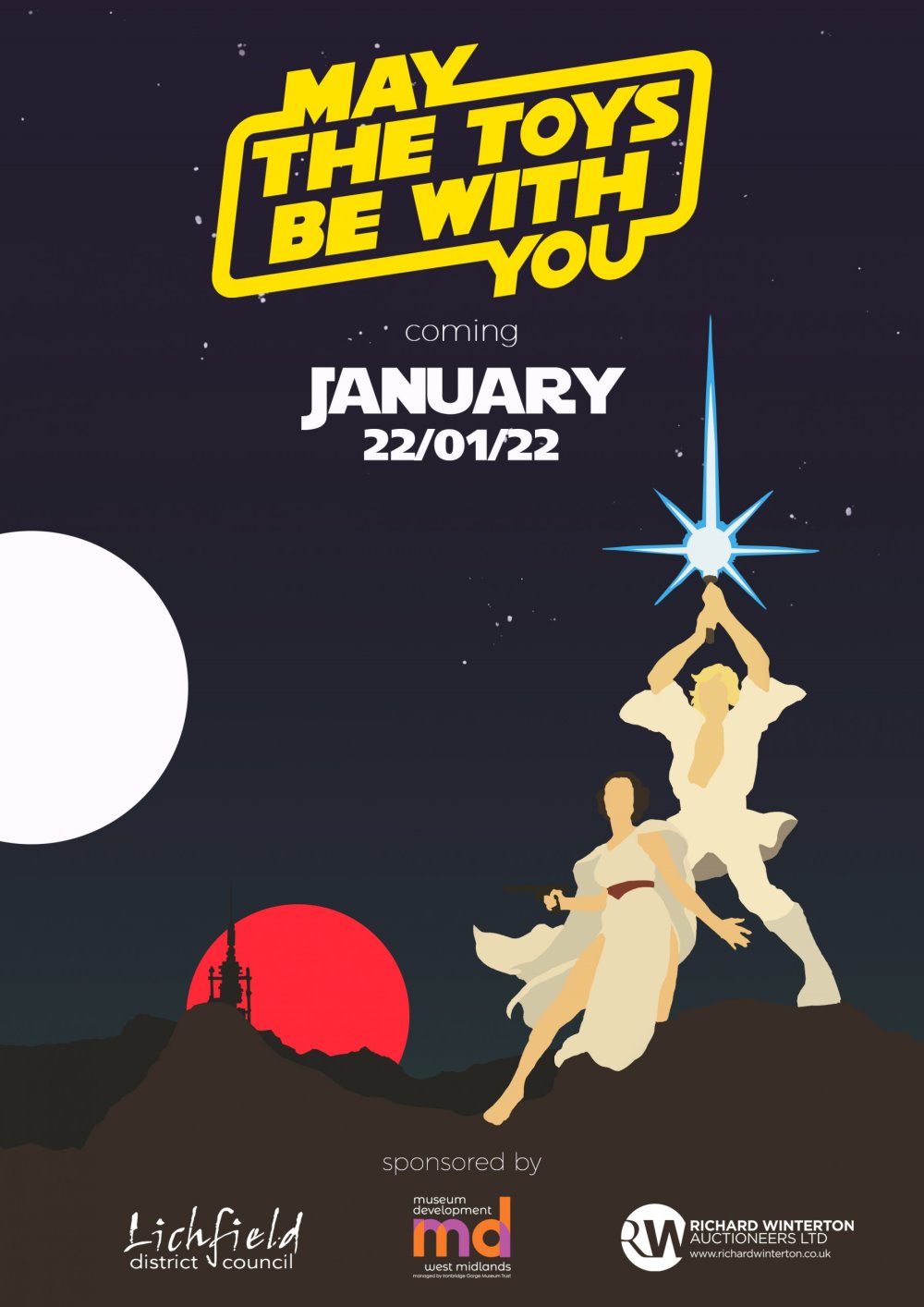 Event Review: May the Toys Be With You: St. Mary’s Centre, Lichfield

On January 22, 2022, from a galaxy far, far away comes an absolute must for fans of Star Wars and the big screen…

One of the UK’s finest collections of vintage Star Wars toys and original cinema posters is featured in a stunning exhibition presented by The Hub.

Back when the Star Wars movie broke box office records in 1977, no one could have predicted that merchandising would earn even more than the movie itself. Star Wars toys have taken the world by storm and become go-to toys for an entire generation. From 1977 to 1985, approximately 300 million figures were sold, allowing children to re-enact the adventures of Luke Skywalker, Princess Leia and Han Solo.

May The Toys Be With You is both a celebration of the now highly collectible vintage toy line, as well as the iconic design work and artistry of the Star Wars films. From X-Wing fighters to lightsabers, these fantastical designs have fired our imaginations and marked their place in our cultural landscape. For kids of all generations, this must-see exhibit of many rarely seen Star Wars treasures has broken museum attendance records across the country, and we’re thrilled for its first visit to Lichfield!

Although The Hub at St Mary’s in Lichfield, in the heart of Staffordshire, might not immediately strike you as the most obvious place for a star wars exhibition, there are more than one star wars connection with the region as one might think. The nearby Lichfield Garrick (formerly Lichfield Civic Hall) hosted the Hiss and Boo pantomimes directed by Ian Liston, the actor behind Wes Janson in The Empire Strikes Back and where future BB-8 performer Brian Herring would perform in his youth. Just 25 minutes along the A-38 and you arrive in Birmingham, home to a number of GFFA players including Marc Silk of The Phantom MenaceFelicity Jones from A thug and the legendary Kenny Baker (and by the way I’m based a few minutes away in Burntwood) but more than any of those links, it’s here because St Mary’s is the perfect venue for an exhibition like this.

While Dyott Chapel remains for occasional services, St. Mary’s is now best known as the city’s library, with over 200,000 books housed in the old church. With the current neo-Gothic building from 1870 replacing the old churches dating from 1150, this is a great place to celebrate the early days of the saga, and on entering the building you walk past the library and up the stairs to at the newly developed messanine level where a café and this fascinating exhibition are housed.

Matt Fox has hosted this type of event before, taking his amazing collection across the country and here he is once again focusing on arguably the most beloved aspect, the toys. The original Palitoy sets are interspersed with their Kenner cousins, with the Early Bird sets sitting alongside variants showing the subtle differences between figures made in other countries. Casual fans will certainly feel a buzz of familiarity seeing these venerable toys in their natural surroundings, mixed as they are with one of the – if not the – best collections of the UK’s original trilogy. star wars posters accessible to the general public.

The attraction of the exhibition is undeniable. Quads (UK posters are ‘widescreen’ rather than ‘portrait’, the only country to do so) reveal the excitement of star wars (no A new hope here), the promise of The Empire Strikes Back and the satisfactory conclusions of Return of the Jediwhile promising a thrilling double bill and a unique triple bill in the days before the entire saga was released on home video in 1986.

In the next room are the familiar playsets and vehicles from the original trilogy, set up in exciting dioramas evoking those much-loved early ’80s box images. There are 12-inch figures, blasters boxed, die-cast Star Destroyers, remote-controlled Sandcrawlers (many sets and figures will be very familiar to younger converts to the GFFA of The Mandalorian and Boba Fett’s Book) and board games. We spot workers building Millennium Falcons in Coalville, 40 minutes east of Lichfield, and smile at the Darth Vader signatures handed out to children at events and in-store appearances. It’s a tonic, a plunge into a simpler time.

The screens and posters are accompanied by video screens showing content from the era, as well as more contemporary subjects, including Rancho Obi-Wan, the permanent big brother to wandering siblings like this, and while the loop walk ends with a look at sumptuous Return of the Jedi posters, fans old or new, casual or hardcore can’t help but smile at the memories these items evoke.

To me, star wars will always be Wednesday afternoons, running as fast as I could run to my local newsagents to catch my Star Wars Weeklya breathless sprint to snap my 10p and grab a week of reads and re-reads before the next adventure arrives (and maybe a Texan Bar and 5p mix while I was at it).

star wars has a unique power to excite, to layer new adventures that enhance old ones but still enroll them in memory banks. May the toys be with you does it in style, and if you’re within driving distance of Lichfield – or even if you’re not – it’s well worth a visit to a beautiful three-spired cathedral city with – until 20 March 2022 – a heart from Kyber.

You can listen to our chat with event organizer Matt Fox on Making Tracks Episode 124, and stay tuned for more on and coming May The Toys Be With You. star wars related events at The Hub at St. Mary’s.

The Art of Star Wars: Visions