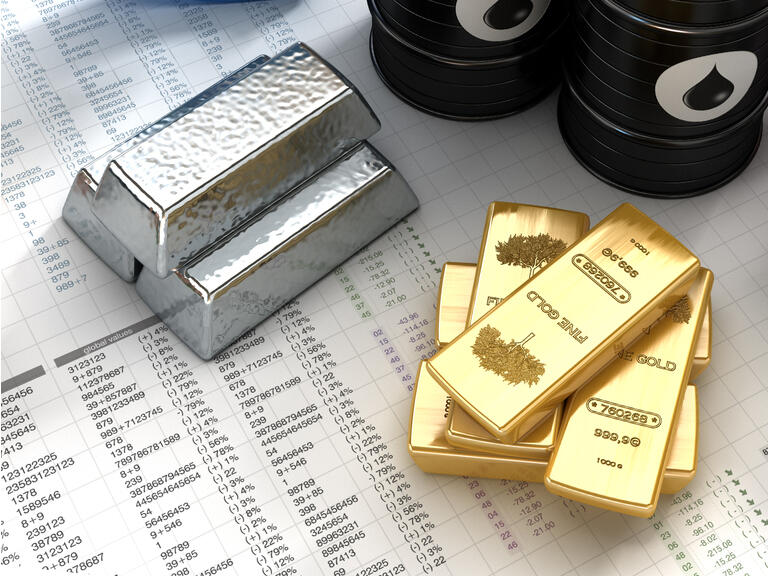 Bond market volatility is getting so extreme that even the mainstream financial news media have reported on it. in this video for example from CNBC, analyst Guy Adami denounces the recent volatility of 10-year yields as very abnormal and worrying.

“Even though I’m not the brightest bulb in the knife drawer, you know what I mean,” jokes Adami, “One thing I do know is that the biggest economy in the history of the world, 10 years reports [sic] should be the most liquid security there is. It shouldn’t go up, in my opinion, to 1.41%, down to 1.25%, back to 1.40%, down to 1.13%, up to 1.30%, all over essentially 12 trading days. It doesn’t make much sense. Bond volatility is extraordinary while stock volatility is not. Something is wrong here.”

In fact, it makes a lot of sense. It’s simple why this happens. The reason why, as I will explain, makes it virtually impossible for the Fed to end its quantitative easing of $120 billion a month without causing a slingshot in long-term interest rates. This, in turn, means that it is probably impossible for the Federal Reserve to fight consumer price inflation and therefore at some point we will soon see a very strong reversal in the metals markets. valuable when the whole narrative of transient inflation completely evaporates.

I have a question. How much of the new Treasury debt issued since the post-pandemic era is monetized by the Fed, compared to past quantitative easing? Admittedly, the first three QEs were heavy on dollar creation, but a large portion of the new dollars was absorbed by foreigners. In other words, this inflation created by the first three QEs has been exported. Exactly how much I will show you shortly.

This is no longer the case. Now, monetary inflation remains at home in the United States, ready and eager to continue driving up consumer prices. Foreign demand for US Treasuries has dried up to the point that almost none of the new debt issued in the post-pandemic era has been absorbed by foreigners.

But it’s not just foreigners who have stopped buying. Demand for this relentless stream of US Treasury papers has dropped to near zero in all but two groups. These groups are:

That’s it. Just those two.

Here’s a chart that may look familiar, but I’m guessing you’ve never seen it before. Hint: It’s do not the Fed’s balance sheet.

This is the amount of Treasury bonds alone on the Fed’s balance sheet. Many do not realize that the QE1 of 2008 had nothing to do with the purchase of Treasuries, and therefore no Treasury debt had to be monetized at all. In fact, treasury bills were actually liquid before and during the 2008 financial crisis. So what exactly is QE1? These were mainly emergency commercial paper loans and foreign loans, assets that were liquidated after the end of the acute phase of the crisis.

Then QE2 added about $900 billion in Treasuries and QE3 added about $800 billion. But these are peanuts compared to the post-Covid era of money printing. Since March 2020, the total stock of Treasuries has ballooned by more than $5.1 trillion. As you can see from the graph above, over $2.7 trillion of this new issuance has been clawed back by the Federal Reserve.

In 2008, the Fed received major help from foreign investors to absorb the inflation it was creating. Below is a graph generated from the International Capital Treasury figures, from January 2008 to July 2021. These figures correspond to the total of treasury bills held by foreign official accounts. 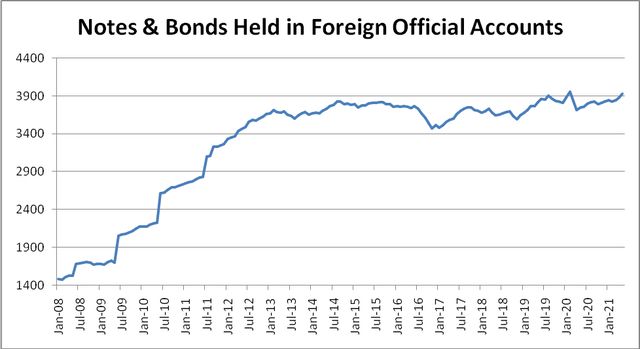 You can see here that official foreign holdings of US paper really increased in the aftermath of the 2008 financial crisis. And since the post-Covid era? Peaking in February 2020 just before the first round of shutdowns, official foreign holdings of Treasury bills and bonds are essentially stable. Foreign investment in Treasuries has actually been flat since late 2014. This means the Fed has had to monetize nearly all new issuance itself, a debt bargain far more extreme than anything we’ve seen. saw in the aftermath of 2008.

SIFMA breaks down the numbers more precisely. From late 2007 to 2014, when foreign holdings of US Treasuries began to plateau, the stock of Treasuries grew by $8.6 trillion. Meanwhile, foreigners scooped $3.81 trillion from that tab, just under half. The Fed clawed back about $2 trillion. Together, these two buyers accounted for about 2/3 of all shows in those years. Here is the full table from SIFMA, with my calculations in the last two rows.

Foreigners absorbed just over 44%, or nearly half of all Treasury issues from 2008 to 2014. Over the past year, it has been just 7%. The difference between the SIFMA table and the chart above is that the table counts all foreign holdings of any kind, and the chart only counts foreign official accounts, mainly central banks. All other investor categories remained stable, with the minor exception of state and local governments, which absorbed 5.87% of total issuance since March 2020. The Fed monetized about 55%, while funds mutual funds recovered the rest. Together, the Fed and mutual funds account for just under 80% of all post-Covid QE.

Demand for Fed Treasuries and mutual funds is the same

If the Fed and mutual funds buy $4 out of every $5 of debt issued by the Treasury, what happens when the Fed tries to cut inflation in order to fight price inflation? Well, I would say the demand for mutual funds and the demand for the Fed via QE are inextricably linked.

Mutual fund demand for Treasuries is entirely dependent on the Fed continuing QE as is, as funds only absorb Treasuries if investors choose to chase those funds higher in the first place. And investors only chase treasury debt funds if the Fed is supporting the price because real interest rates are deeply negative and buying treasury debt funds for any reason other than capital appreciation has absolutely no sense. Capital appreciation depends almost entirely on the Fed, as does demand for mutual funds itself.

So, it can be said that the Fed is actually about 80% of total Treasury demand in the post-Covid era, given that if the Fed stops buying, mutual funds will also buy in its wake.

Out of control inflation

And that means the Fed is stuck in a positive feedback loop that it can’t control. Its 80% monetization of debt in the post-Covid era means that monetary inflation is not exporting like it was in 2008-2014, which means that this QE has more inflationary effects on prices. immediate to us. Eventually that’s going to force the Fed to at least try to decrease, at which point, demand for Treasuries is going to drop mutual funds, and it’s almost certainly not going to increase at all in any other category of investment at less than real interest the rates are, well, actually positive, with enough return to offset the risk.

This means that for Treasury demand to pick up in any other category, nominal rates are going to have to skyrocket quite suddenly, well above the CPI inflation rate, which is currently 5.4% and in growth. It would be radically destabilizing. And we’re running out of time. The psychology begins to turn.

I’m not the brightest bulb in the knife drawer, if you know what I mean, but I dare say that the reason bond volatility is so extreme, and the reason bond volatility is Bonds makes perfect sense is that the Fed is buying 80% of the entire Treasury market, dragging massive demand for mutual funds in its wake. With an illiquid market, we should see bond yield volatility accelerating in the coming months. Once the gold and silver markets realize what is really going on, that price inflation cannot be contained, we will be in a different world.

Gold and silver investors, it is said, are in a different world. To some extent, this is undeniably true. We’re just waiting for everyone to get here. It’s still quiet here. We entered when tickets were cheap and the stadium was still relatively empty. It looks like a lockdown actually. We don’t know what everyone is doing at this crazy party in Fed country. But we still recommend spending no more time there in the transitory world of the Fed. It is not price inflation that is transitory, in our view. It is the Fed that is transitory, as well as its main liability on the balance sheet – the US dollar itself.