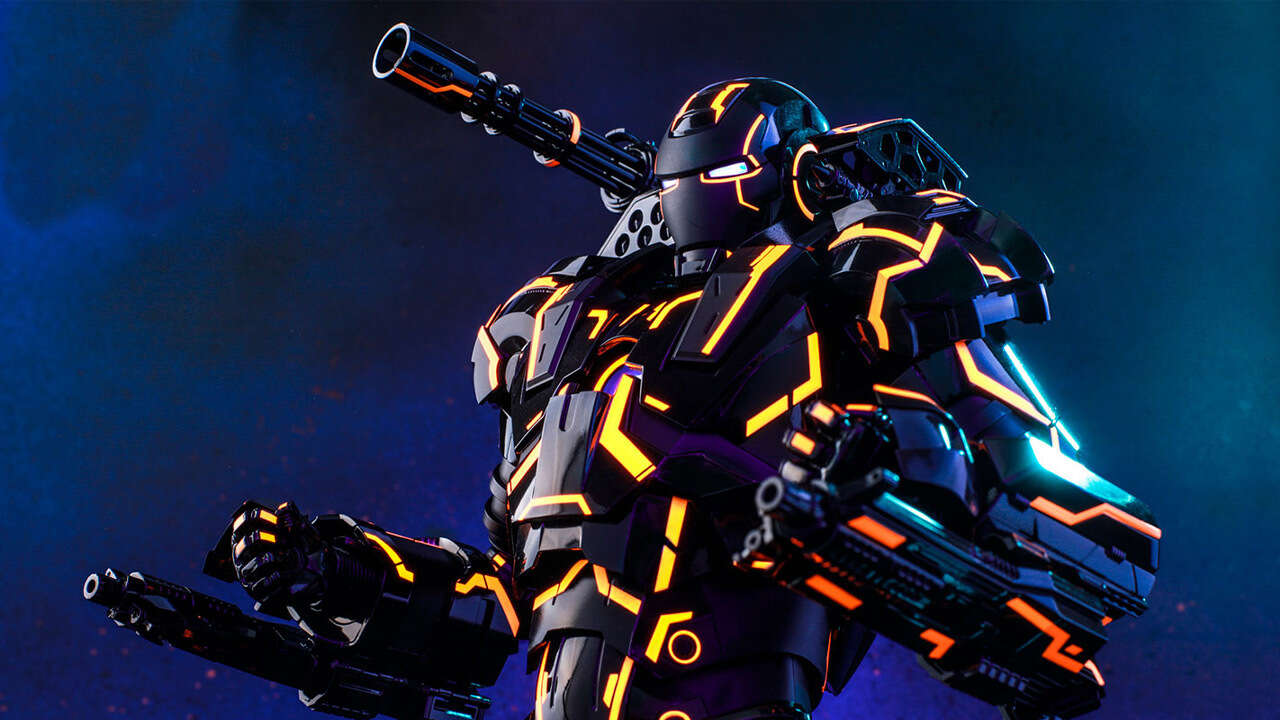 What happens when you combine fluorescent paint with mechanical precision? You get a replica of an armored Avenger that combines screen-accurate detail with nuanced creativity. On the surface, the Neon Tech War Machine die-cast figure has everything you’d expect from a sixth scale version from Hot Toys – LED light-up function, movie-accurate proportions and extra parts – but it’s the light-up reflector patterns and an elegant application of paint that make this replica stand out.

War Machine’s default skin emphasizes designing the character as a walking arsenal packed with absurd firepower. Combining advanced Iron Man technology and an infinite ammo cheat code in a first-person shooter, the War Machine armor introduced in Iron Man 2 and the Marvel Cinematic Universe reflected the character’s military origins. A modified Iron Man Mark II suit, clad in black and gray armor, and sporting a shoulder-mounted mini-pistol that looked like it was pulled straight from the comics. It’s an iconic look for the character, but one that could be improved upon.

Sure, the Civil War costume streamlined the armor that was rendered around Don Cheadle’s portrayal of James Rhodes and it was fitted with a more patriotic costume by the time Avengers: Endgame hit theaters, but have you ever wondered what an electronic dance would be like what War Machine would sound like, inspired by the music?

That’s probably the only way to describe this alternate version of his armor, as Hot Toys has tinkered with these designs as part of their Neon Tech line of Iron Man action figures. In case you missed the original War Machine release, the Neon Tech armor is an intriguing alternative that instantly grabs attention. The most obvious attention is the color scheme of this 6 scale figure, using a combination of gloss and matte black panels as well as UV sensitive orange highlights that illuminate the figure without you needing to install any tiny batteries for the LEDs.

However, batteries are still required for the other lighting functions of the suit. Like all other Hot Toys figures built around Stark Industries technology, War Machine features LEDs in the eyes, arc reactor and palms. It’s still an absolute pain to unscrew multiple panels and insert tiny batteries that require surgical precision to insert correctly, but once that ordeal is over, it’s hard to argue with the end result: a figure that looks great with its minimal use of color.

A glossy black finish would have been too familiar, which is why the matte accents are so nice. The effect is subtle but striking, and further enhanced by the neon lines spread across the figure. Shining a blacklight on the neon highlights makes them even more luminescent, a neat effect that works well in the dark provided you have a blacklight flashlight.

It’s a gimmick, but it’s cool stuff that works surprisingly well with the other Neon Tech Iron Man costumes that Hot Toys has released, ultimately creating what can rightfully be considered a weaponized quartet of Daft Punk fans. who are on their way to an anniversary screening of Tron: Legacy.

As a figure though, this War Machine is still one of the best thanks to some clever engineering. You’ll need to be careful handling it, as the glossy black paint is a fingerprint magnet, but this particular replica is mechanically strong thanks to the many die-cast metal parts inside. You’ll be able to strike a range of moves with War Machine, from screen-accurate battle poses to the iconic three-point landing thanks to a stretchable torso and manipulated shoulder parts to make the bulky soldier more flexible.

Be careful with these shoulder pads, as the support system seems a little flimsy. A muscle-fisted posing section isn’t advised, but considering the price of this figure, you’ll probably be treating it with kid gloves anyway. Other interesting parts of the design are in the torso, where the rocket launchers can be popped out, although you have to fiddle with the placement of the mini-gun to accommodate those internal weapon systems.

The suit also features a few other panels that can be flipped up or removed to reveal more internal details, such as additional thrusters, hidden rockets and thrusters that give this figure a flight-ready appearance. This makes for a surprisingly and reassuringly heavy figure.

Don’t expect too many extras, as the only accessory for the figure is a themed display stand which should have been larger to accommodate the figure more easily. On its own, however, War Machine is as comprehensive as one would expect right out of the box. The default fists can be swapped out for hands with poseable fingers or hands in the repulsor-firing position, while the included mini-gun and rubber ammo belt will naturally be permanently attached once you put it on display .

So, who is this particular figure for? For anyone who missed the original War Machine, there’s a second chance on the horizon right now to grab this figure in the classic color scheme. For finalists, the allure of having yet another Iron Man-related figure that can be used to create the ultimate house party protocol is understandably tempting. But for anyone looking for something more unusual and unique, the Neon Tech War Machine is a fascinating addition to any collection.

Whether you’re looking for your first 1/6 scale figure to have on your desk while you work or you’re a seasoned collector looking to spice up your shelf, this variant of the classic Marvel hero combines terrific collectible figure engineering with a head. -swivel design that stands out from everything around it. I should know, because between my Mark 85, Spider-Man: Homecoming Mark 47, and the Age of Ultron Mark 43 Iron Men I have in my display case, my eyes are still fixed on this dubstep-fueled war machine .