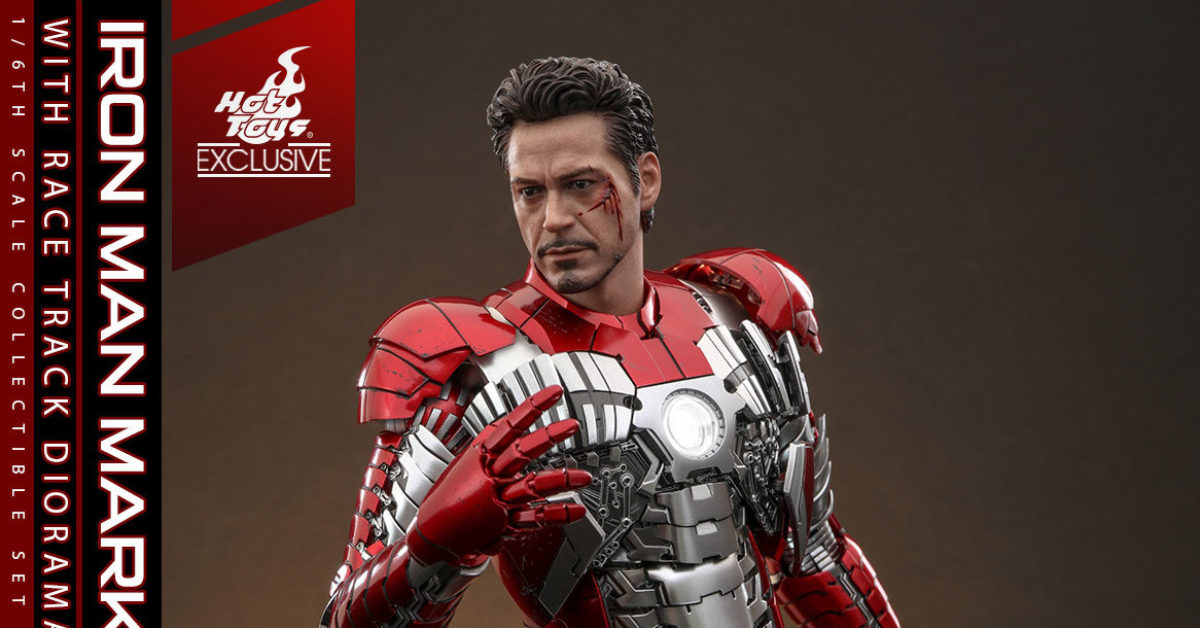 Hot Toys brings Marvel Studios fans back to The Infinity Saga once again with the arrival of their all-new 1/6 scale action figure. The Mark V armor of iron man 2 makes a stunning return with a newly revealed die-cast figure with a new diorama base. This red and silver armor was featured on the race track just like in the Iron Man sequel movie as Tony Stark prepares to take on the mysterious villain known as Whiplash. This wearable armor is beautifully sculpted, standing 12 inches tall, with 30 points of articulation and even light-up elements. A beautifully sculpted secondary head sculpt is also included. Robert Downey Jr. a likeness fans won’t want to miss. Tony’s sleek Mark V suit will have adjustable armor pieces, plus interchangeable hands, a briefcase, Whiplash Arc Reactor and racetrack base to help enhance his display. Iron Man 2 Mark V is set to be a Hot Toys exclusive, and pre-orders aren’t live yet. Fans can find the official Hot Toys Iron Man 2 Mark V Armor page here, and you can find all things Hot Toys for pre-order here.

“Iron Man Mark V, known as ‘The Suitcase Suit’, is a lightweight, wearable version of Iron Man’s armor that can be put on quickly in times of danger, allowing Tony Stark to dress as seconds – something he desperately needed when he was ambushed by Whiplash during the Monaco Grand Prix!Hot Toys presents the Iron Man Mark V 1/6th scale collectible figure and set of Diorama base available only in select markets. Precision-recreated die-cast “Suitcase Armor” figure features poseable armor pieces and a highly articulated frame for dynamic posing and display.

“Plus! The figure exclusively includes a highly elaborate diorama base reminiscent of the dramatic showdown between Iron Man and Whiplash, complete with damaged engine parts and a circuit railing. Be sure not to miss the opportunity to own the special Mark V figurine today!”