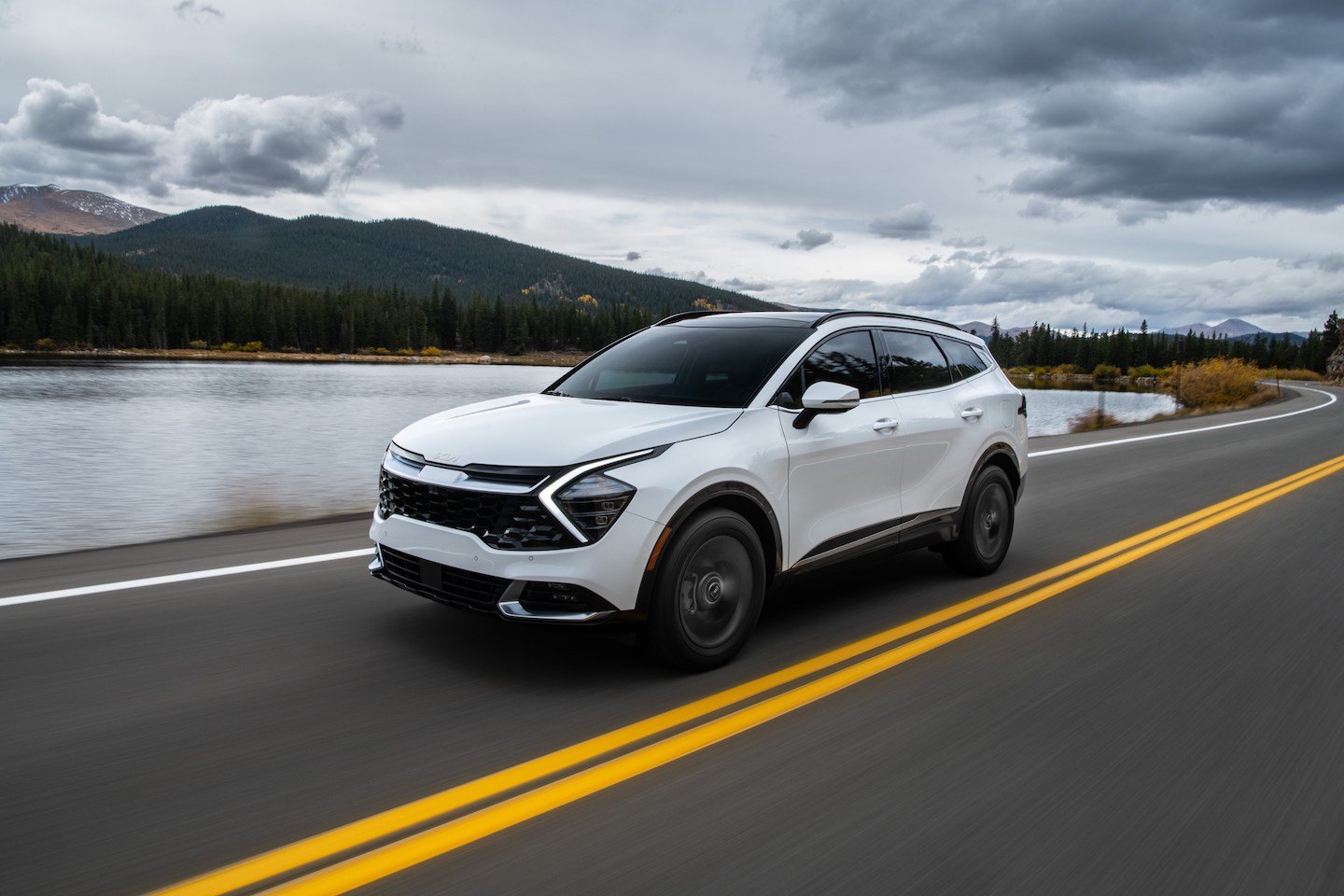 Kia has been doing pretty well lately, with sales increases for calendar year 2021 in Canada and the United States, and that compares the numbers to 2019 instead of 2020 which was ruined by the spread of COVID-19.

In addition, and although the brand already has a few fully electric vehicles in its lineup, the latter is poised to offer a lot more with the recently unveiled fully electric crossovers. Combine that with a full lineup of cars and utility vehicles, and it’s no wonder that Kia is on a roll lately. Here’s what to expect from the Kia brand in 2022.

The Kia EV6 2022 is the brand’s first dedicated electric vehicle, which means it’s the first model developed from the ground up as an electric vehicle, based on parent company Hyundai Motor. new E-GMP platform. The EV6 is a five-passenger crossover available with rear wheels and AWDs as well as two battery sizes, while horsepower will reach up to 576 horsepower in a future high-performance GT variant. The EPA rated the range of the EV6 at between 232 and 310 miles (373 and 499 km). In Canada, the the initial allocation of 200 units has already been announced for, and deliveries are expected to begin in the spring of 2022. Meanwhile in the United States, the a batch of EV6 First Edition units has also been collected very quickly, the first shipments to start in January. 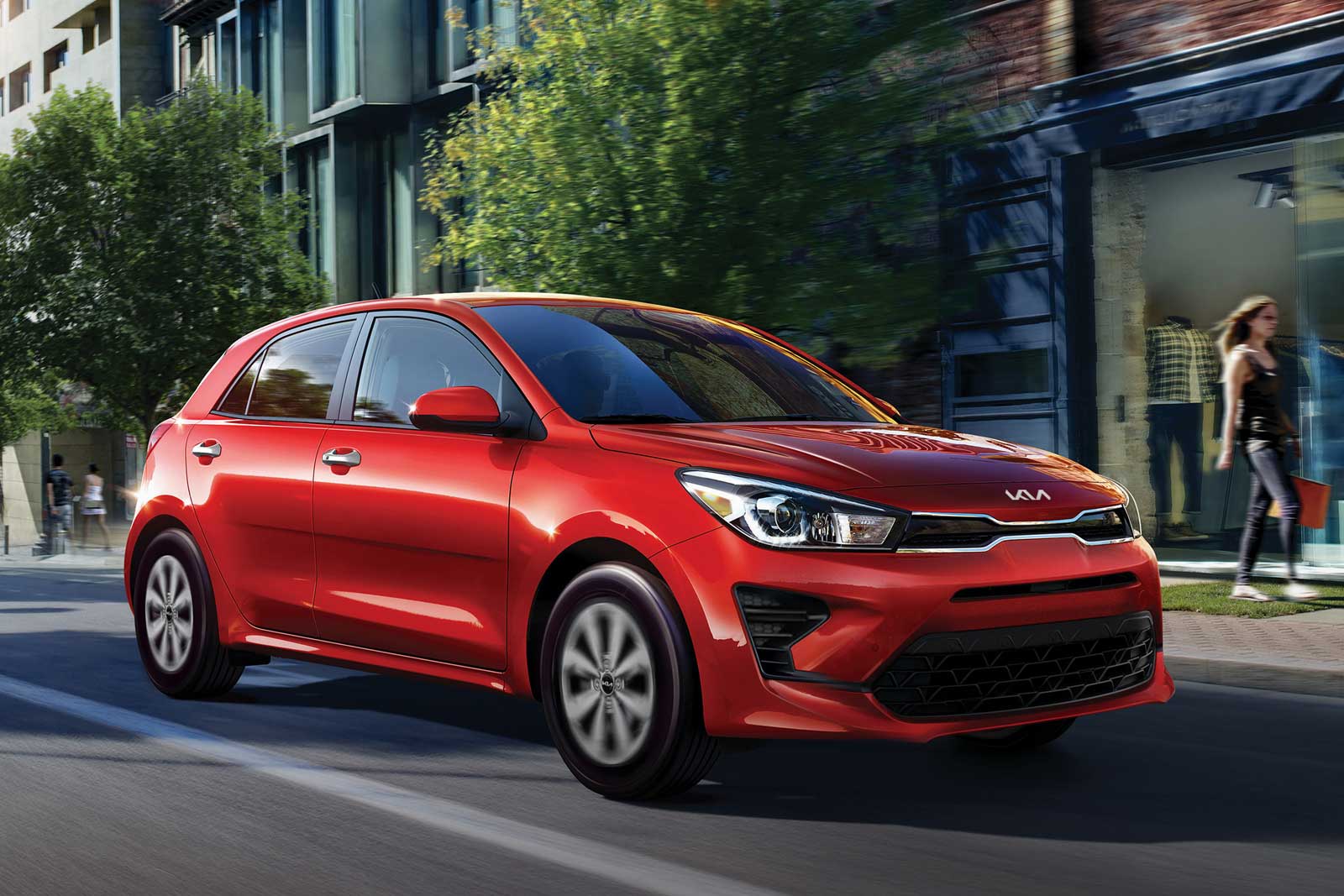 Many mainstream manufacturers have left the passenger car segment to focus on crossovers, but Kia has not. In fact, the latter is one of the few to continue to offer a subcompact car. The 2022 Kia Rio gets an engine immobilizer as its only change this year, having received a mid-cycle refresh in 2021. The Rio is still available in the United States in sedan and five-door hatchback configurations, fitted with a 1.6 four-cylinder engine. L developing 120 horsepower. The sedan was dropped from the Canadian lineup last year, meaning only the Rio hatchback is still offered north of the border. 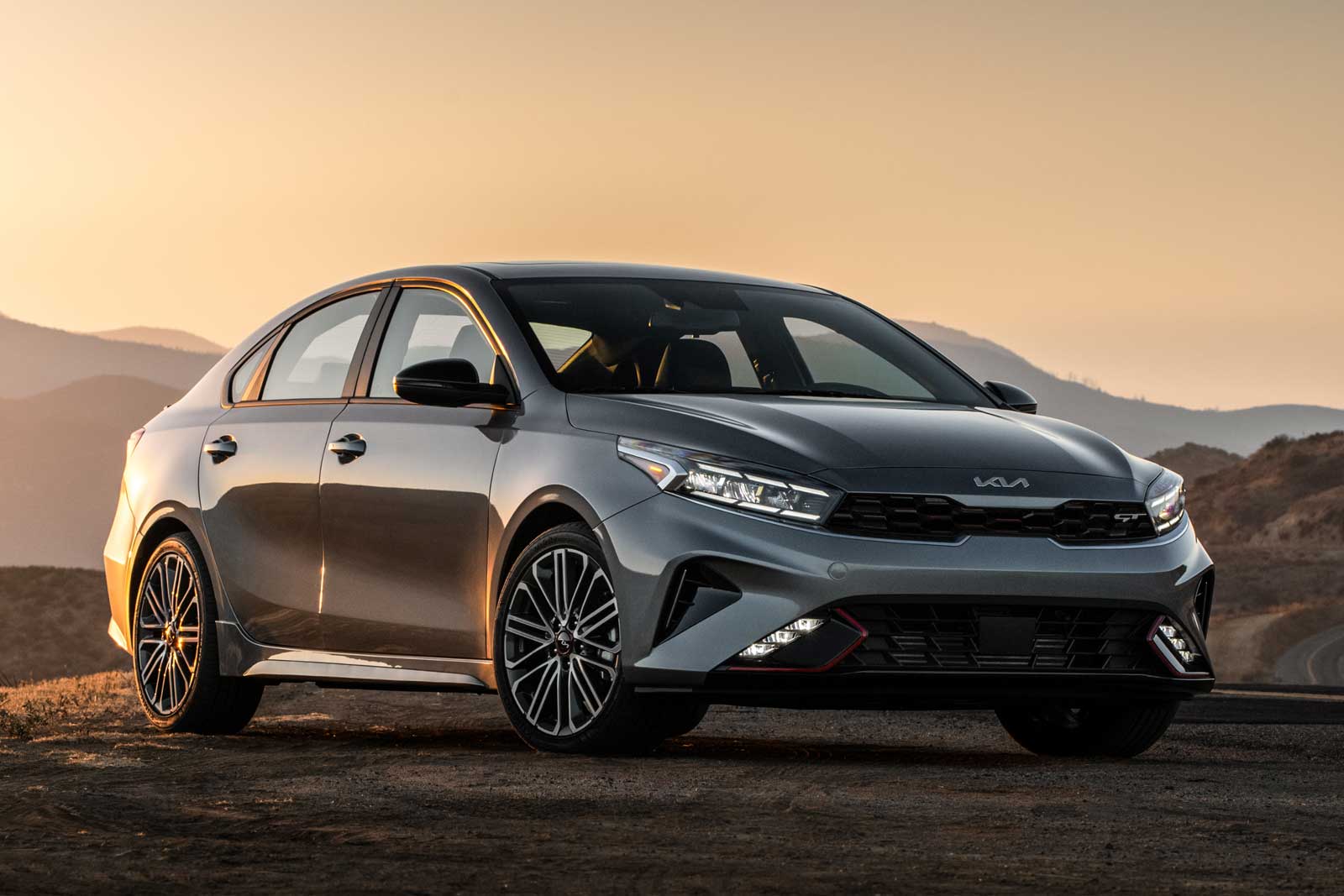 The compact Kia Forte receives styling revisions for the 2022 model year, along with a new 10.25-inch infotainment touchscreen and more advanced active safety features. The EX trim level has been discontinued in the United States, while the GT-Line variant with the base 2.0L 147 horsepower engine is now available in Canada, replacing the GT and its turbo four-cylinder 1, 6 L of 201 horsepower, although the turbocharged GT Limited is still available.

the Kia Forte5 tailgate is available in Canada, but not in the United States. While it does not offer the base trim level and manual gearbox of the sedan, it is available as an EX trim with the 147 horsepower engine, while the GT and GT Limited variants receive the turbo engine from 1.6 L of 201 hp. It benefits from the same styling changes as the sedan. 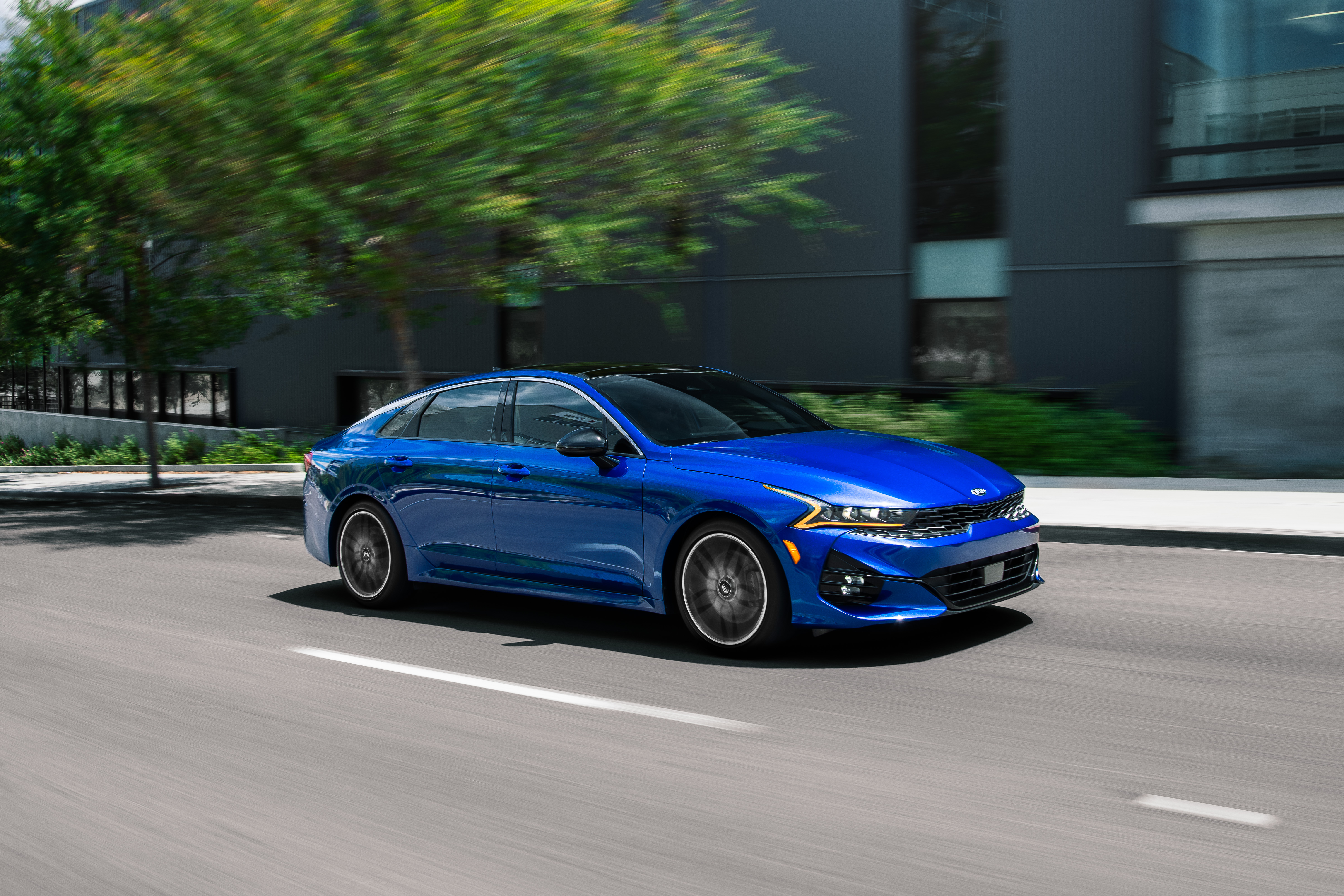 Launched last year as a replacement for the Optima, the Kia K5 gets new features for 2022, such as a surround view monitor, extended availability of charging and navigation for cordless phones, and a new Premium package for the GT-Line in the US market. Front-wheel drive and all-wheel-drive transmissions are available in most ranges in the United States, while the Canadian market includes all-wheel drive in all trims except the top-of-the-line GT. Engine choices include a 180-horsepower 1.6L turbo four-cylinder and a 290-horsepower 2.5L turbo four-cylinder.

The 2022 Kia stinger want on sale in the summer of 2021 with slight styling changes and new alloy wheel designs. Customers in the US market have a choice of a 2.5-liter turbo engine producing 300 horsepower or – which replaces last year’s 255-horsepower 2.0-liter engine – and a 3.3-liter twin-turbo V6 developing 368. horses. In Canada, only the twin-turbo V6 is available. The Stinger also gets a few interior upgrades, including a 10.25-inch infotainment touchscreen, a few trim changes, and ambient lighting.

The average size Kia Cadenza and in real size Kia K900 luxury sedans were withdrawn from the US market after 2021 and have not been available in Canada for a few years now. 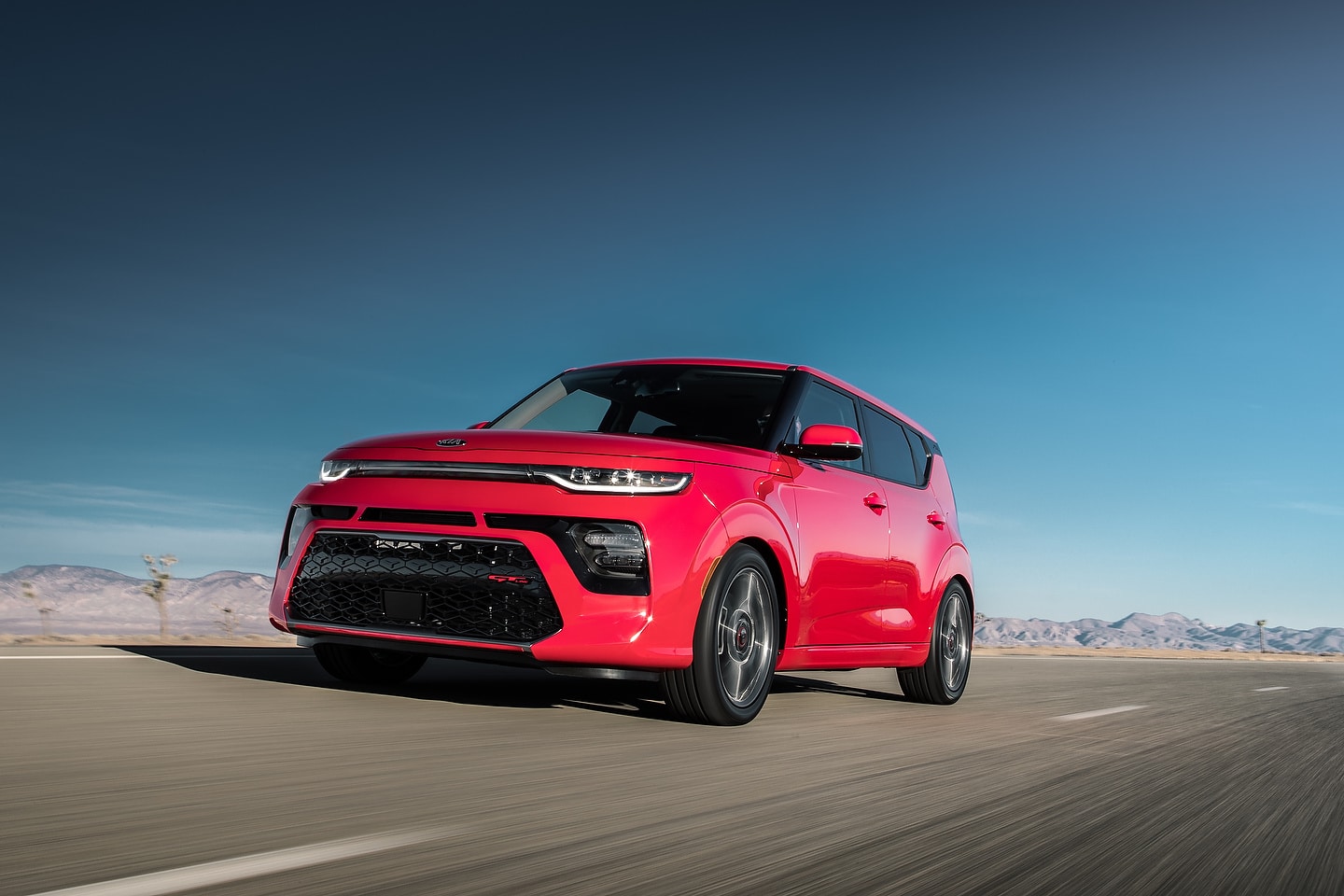 the Kia soul arrives in 2022 with virtually no changes, available in LX, S, X-Line, GT-Line, EX, and Turbo variants in the US, and all but the Turbo get a 147-horsepower 2.0L engine paired with a six-speed manual or a continuously variable automatic, while the Turbo relies on a 1.6 turbocharged four-speed engine and a seven-speed dual-clutch automatic, good for 201 horsepower. Canada gets the LX, EX, EX +, EX Premium and GT-Line Limited trims, all with the 147 horsepower engine and CVT. 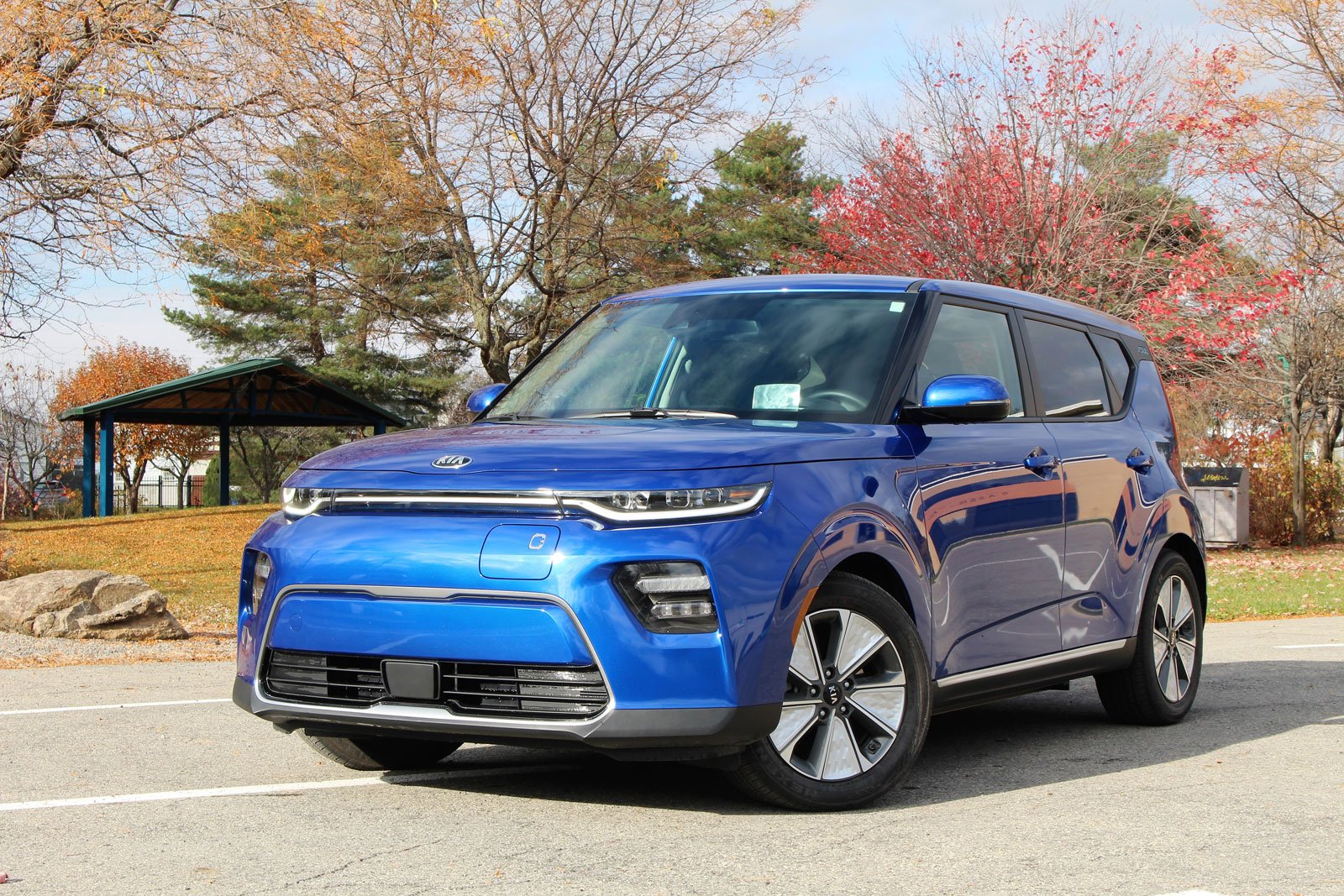 Meanwhile, the Kia Soul EV Also continues largely unchanged, but is only available in Canada at this time. The fully electric crossover’s EV Premium trim features a 134 horsepower motor and 39.2 kWh battery, while the EV Limited has 201 horsepower and a 64 kWh battery, for range estimated at 383 kilometers (239 miles). 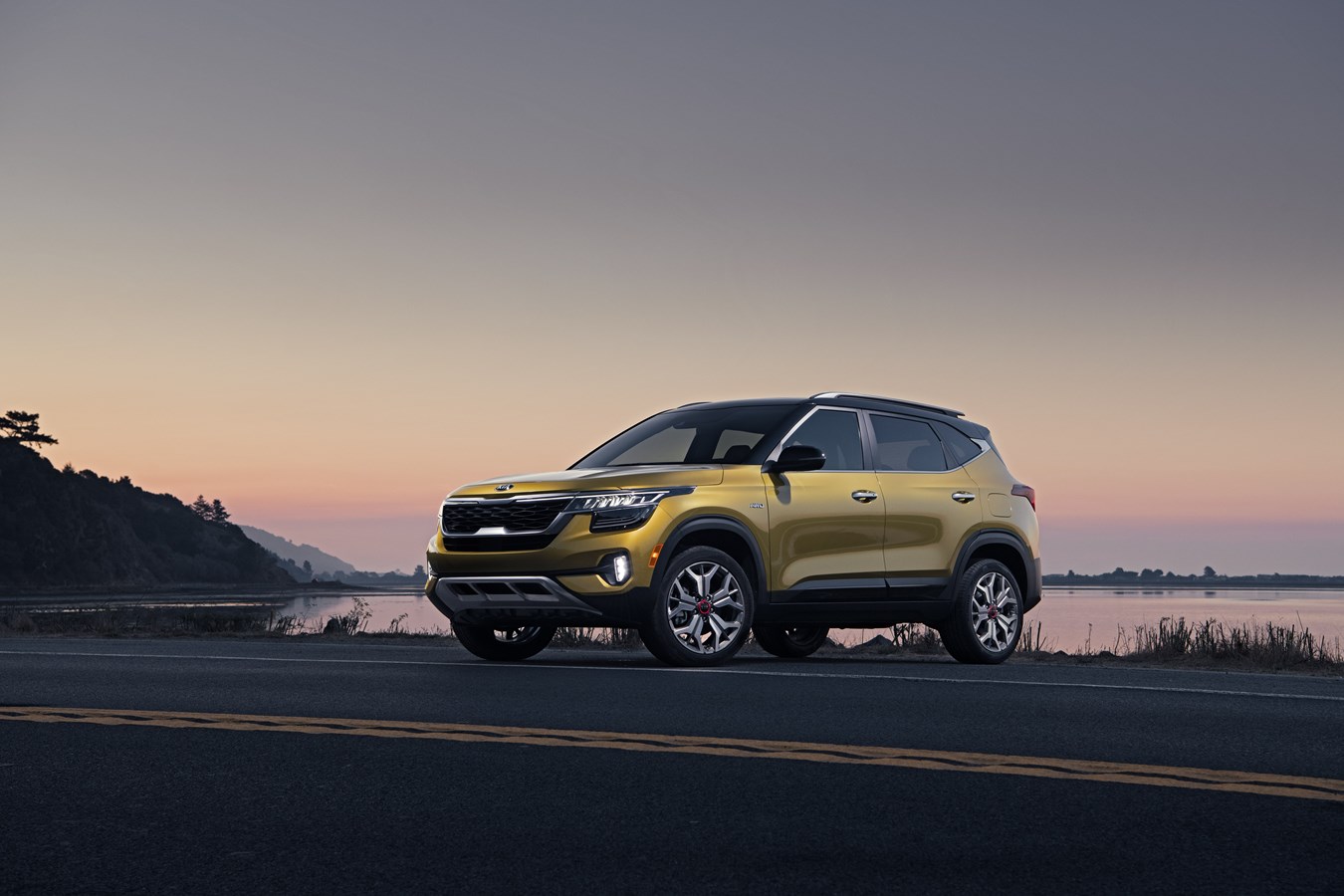 For 2022, the Kia Seltos gets a new Nightfall Edition in the US that obviously features a blackened appearance, and it’s fitted with the SX AWD’s 1.6L turbo engine that puts out 201 horsepower. The rest of the lineup gets a 2.0L four-cylinder that develops 147 horsepower and optional all-wheel drive. A new 10.25-inch infotainment touchscreen is standard on all trims except the base LX version, while more advanced security features are now standard across the range. In Canada, the LX FWD, LX AWD, EX and EX Premium come with the 2.0L engine, while the SX Turbo obviously gets the 1.6L turbo engine. 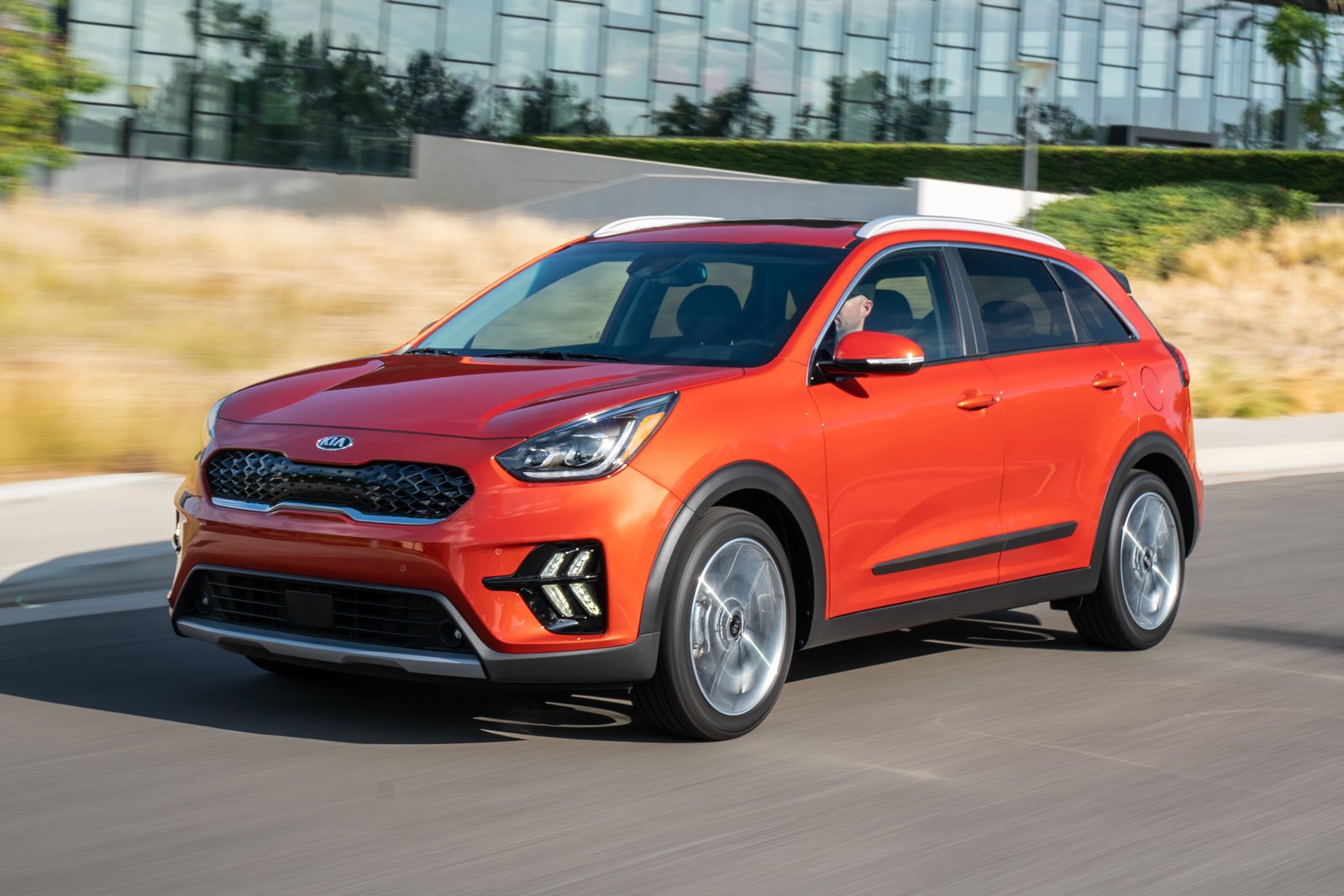 For what is likely its last model year before a redesign, the Kia Niro gets very few changes for 2022. The Niro Hybrid combines a 1.6-liter four-cylinder with an electric motor and six-speed automatic transmission for a total output of 139 horsepower and 195 pound-feet of torque. Meanwhile, the Niro PHEV has a bigger battery and an EV-only range of 26 miles (42 km), and the all-electric Niro has 201 horsepower and a range of 239 miles or 385. km. The 10.25-inch infotainment touchscreen is standard on all trim levels of the Niro EV in the US, but Canada.

The 2022 Kia Sportage received no significant changes from the 2021 model, although a new Nightfall edition was introduced to the US market, replacing the Sportage S. The 2023 Sportage has already been revealed and is expected to go on sale in early 2022, with larger dimensions, an all-new styling, new X-Line and X-Pro trim levels, two 12.3-inch digital displays available, a new 187-horsepower 2.5L four-cylinder engine and 226-horsepower hybrid turbo four-cylinder, optional all-wheel drive and more advanced safety features.

After being redesigned for the 2021 model year, the Kia Sorento returns with a few changes, including increased availability of features like heated captain’s rear seats and a 10.25-inch infotainment touchscreen. Meanwhile, the 227-horsepower hybrid and 261-horsepower plug-in hybrid powertrains have arrived. Three rows of seats come standard for a capacity of seven passengers, while the high-end versions receive second-row captain’s seats, which can carry a maximum of six occupants. A 191-horsepower 2.5-liter four is standard, while a 281-horsepower 2.5-liter four-cylinder is optional. Front-wheel drive is standard in the US, while all-wheel drive is optional, but included in all trim levels in Canada. 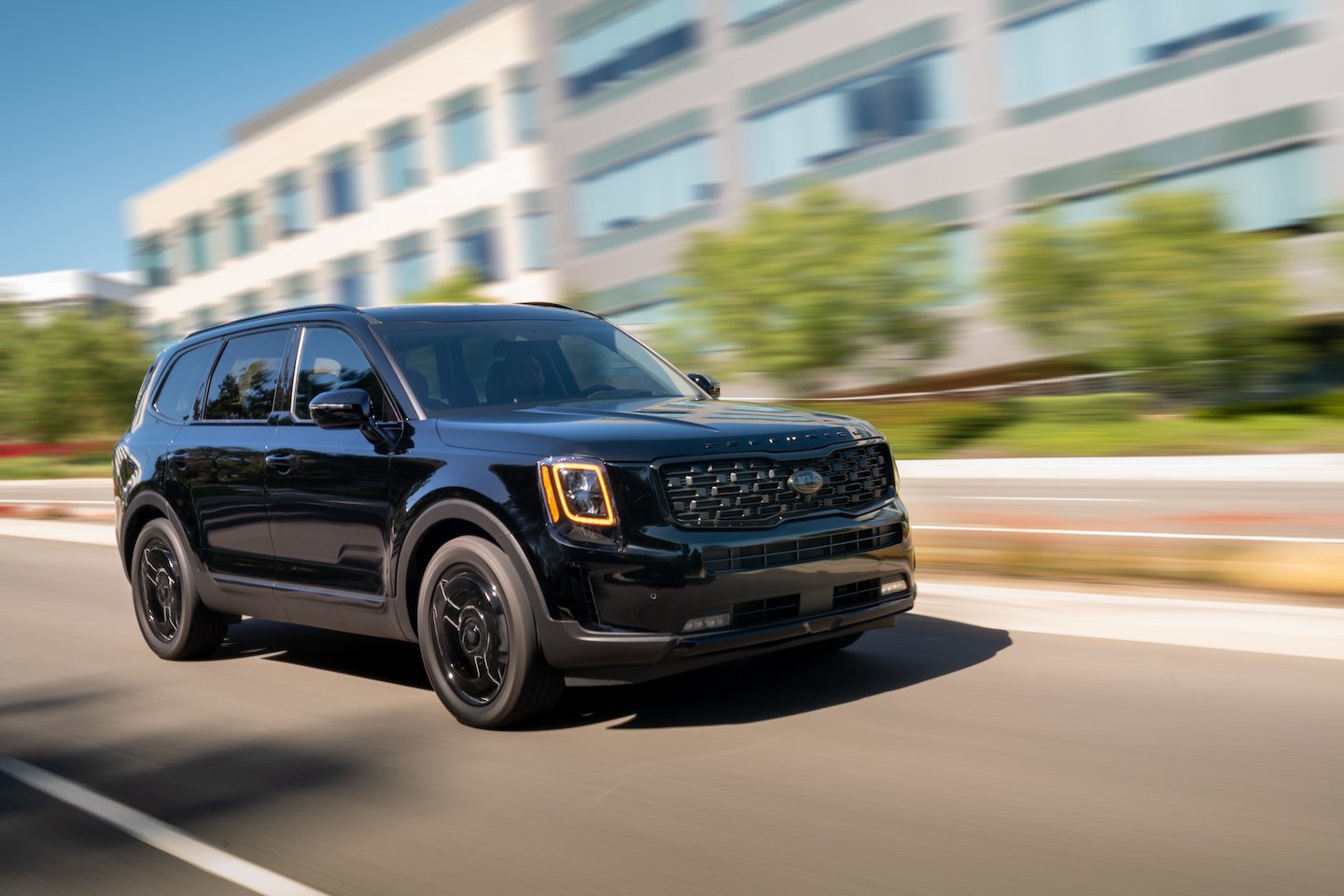 the Kia Telluride enters the 2022 model year with significant changes, though automatic climate control and 10.25-inch infotainment touchscreen are now available on cheaper trim levels. Every Telluride comes equipped with a 3.8L V6 and an eight-speed automatic transmission, good for 291 horsepower and 262 pound-feet of torque. All-wheel drive is available in the United States, standard in Canada.

the Kia Carnival is brand new for 2022, replacing the Kia Sedona in the range of the Korean brand and representing one of the now rare vans on the North American market. It is equipped with a new 3.5L V6 engine producing 290 horsepower and offering a towing capacity of up to 3,500 pounds or 1,588 kilograms. Several trim levels are offered, as well as seating for seven or eight people, and features like second-row VIP seats, a dual-screen rear entertainment system and a host of advanced safety features.

10 brands and gifts to buy at Disney’s 30% off toys, clothing and more