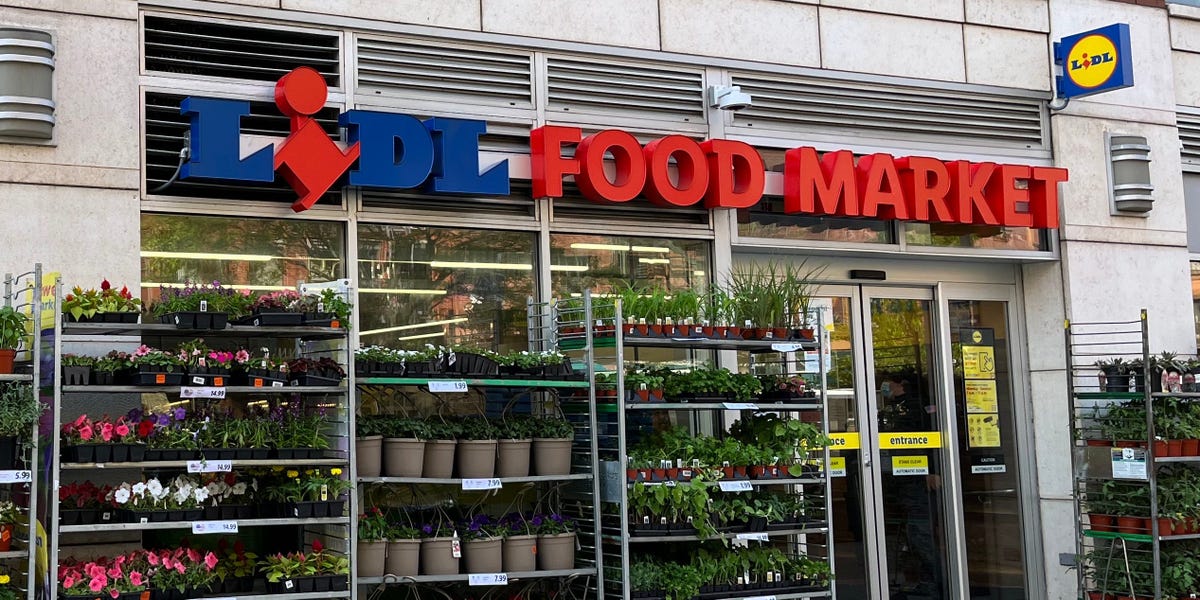 The German discount grocery chain Lidl, which has nearly 12,000 stores worldwide, is expanding rapidly in the United States. It opened its first store in the United States just five years ago and already has more than 150 stores. It arrived in the UK, where it has over 920 stores, in 1994.

Lidl’s US operations are much newer than those in the UK – but what it may lack in experience of the US grocery market it could make up for with lessons learned from its decades of experience. operating abroad. Insider visited a Lidl store in London and one in Harlem – Manhattan’s first Lidl – to see how they compare.

The Lidl we visited in the UK was a standalone store with its own car park in a residential suburb of London. Lidl stores generally have a much smaller floor space than other grocery stores.

The Lidl we visited in Harlem was a completely different store format. It was in a busy urban area, nestled between a Starbucks and a Chase Bank branch, and didn’t have its own parking lot. But from the road it looked very attractive and had nice greenery on the sidewalks.

To enter the London store, one had to go through two sets of doors. It was a bit like airport security. There were also separate doors to enter and exit which is rare in the UK.

At the Harlem store, you had to go through automatic doors, then a gate that opened automatically. Like many grocery stores in New York, you don’t walk out the way you came in.

The London store seemed relatively spacious, with wide aisles and shelves at reasonable heights that didn’t tower over you.

Some products were in odd places, like this Nutella palette next to sanitary products.

There was also a stack of fresh produce in the middle of an aisle, although there was plenty of space to walk around.

There were a few gaps, but overall the shelves seemed pretty well stocked.

Rather than unpacking the products in rows on its shelves, Lidl displays them in the crates and boxes they come in, meaning there were a few empty crates dotted around.

Pallets formed the entire structure of some of the product aisles.

Lidl is also selling items directly from their delivery boxes in its US stores.

Lidl’s shelves in Harlem were fairly well stocked and the store looked tidy.

It was unclear why these items were chosen for a discount, as they were not seasonal or nearing their expiration dates.

Low-cost toiletries were also plentiful at Lidl Harlem, posing fierce competition for Duane Reade and CVS. Some consumers are hesitant to buy toiletries from grocery stores because they find them more expensive than pharmacies – but Lidl actually had toothpaste for $2 cheaper than what we spotted on sale at Rite Aid earlier in the year. week.

There was also an area with an intriguing assortment of discounted items. We spotted everything from raisins to gummy sushi.

While Lidl sells a few top brands, it mainly sells own brand products. Just like at Aldi, some of its products seem to be closely based on popular brands and in many cases were displayed right next to them but sold at much lower prices. Chocolate biscuits made by Tunnock cost £1.39 ($1.64) were next to Lidl’s own brand equivalent which cost £0.95 ($1.12), for example.

In contrast, baked goods were in a prime position at the front of the Harlem location, with the smell wafting down the street. Although the display is considerably smaller than in the UK, the baked goods are still plentiful and they sometimes change to new ones. Once they arranged a purchase, get a free wand deal. The produce wasn’t as cheap as it is in the UK – when Insider visited, the cheapest buns were $0.59.